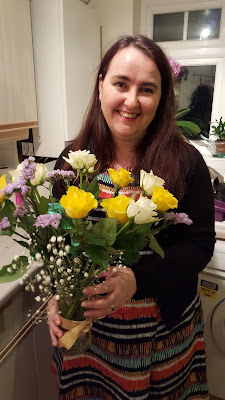 This, is Laura Walker. In November 2018 Laura was diagnosed with stage 2 bladder cancer and an operation would be required to remove the full bladder. On New Year's Eve, she underwent an 8 hour operation to have her bladder removed along with a full hysterectomy, 56 lymph nodes and a section of her lower colon. The surgeons then re-fashioned her colon to make a new bladder for her called a "Neo Bladder". The pictures below start from New Year's Day 2019. 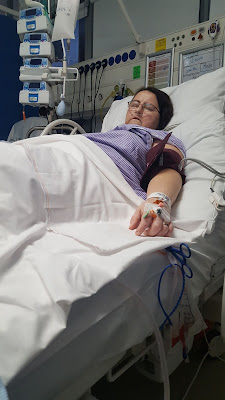 24 Hours after the operation and Laura is sedated in the High Dependency Unit of University Hospital Southampton. 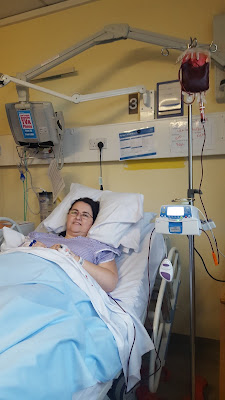 Receiving her second blood transfusion. The first was during surgery. 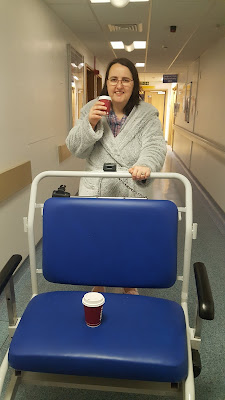 3 days after surgery and she takes her coffee for a walk! 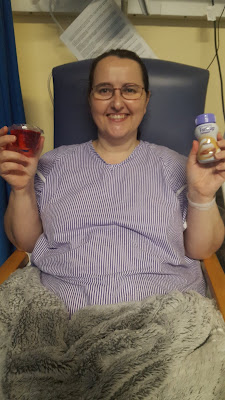 Hospital food. At this stage Laura has a daily restriction of just 750ml over a 24 hour period. 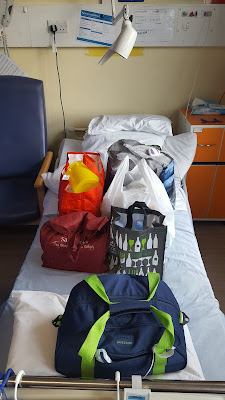 She went into hospital with just the one blue bag, but came home with a total of seven bags containing all of her medical equipment that she will need for the upcoming weeks. 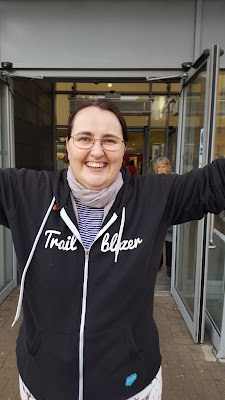 9 days after the operation, she breaks free from hospital! 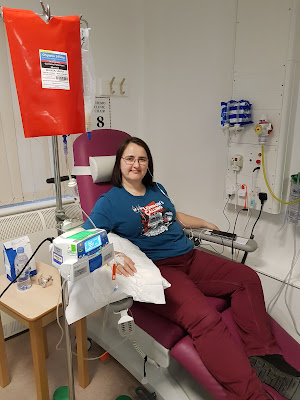 Just six weeks later and the first of her Chemotherapy treatments start. 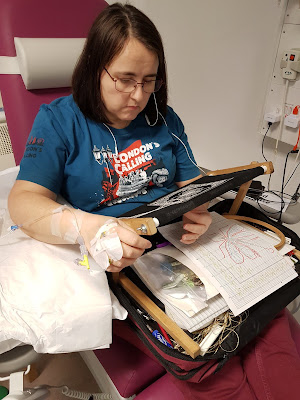 A cannula is used for the drugs to enter the body. Depending on which part of the cycle, treatment can last up to five hours at a time. 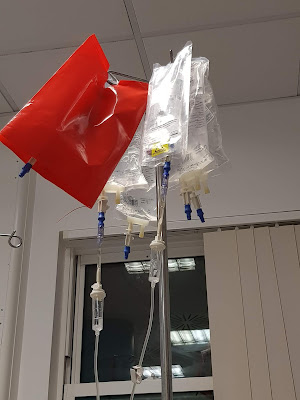 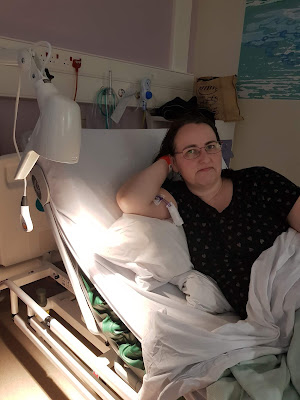 Shortly after Easter and Laura is admitted to hospital with sepsis. 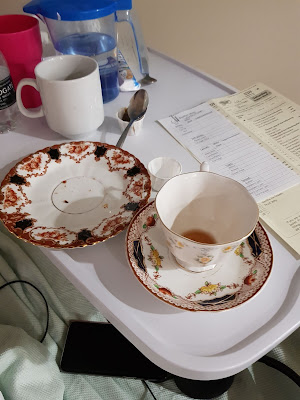 Although the china tea cups and cake provided by the hospital volunteers do try and help make you feel at home! 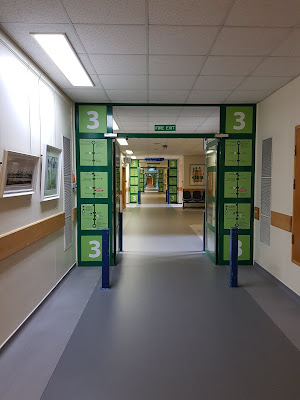 Meanwhile, this is David's view at various times of the day and night. 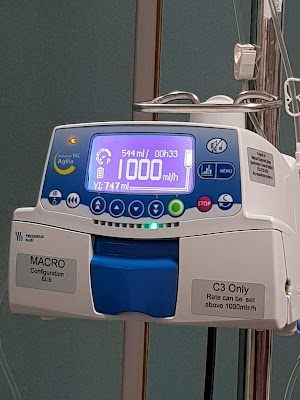 These machines regulate the flow of the drugs into the body and have a really annoying beep which never seems to stop. 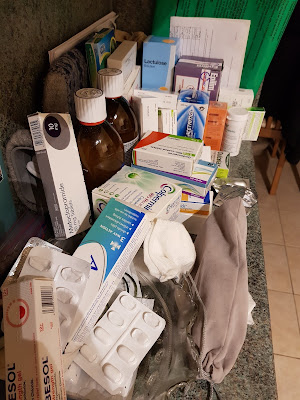 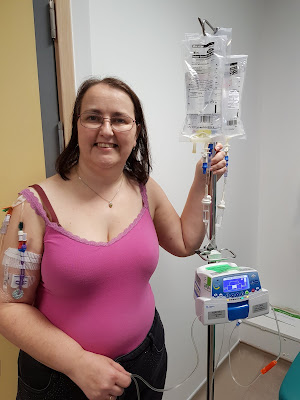 Instead of using a cannula, Laura now has to receive all treatment through a picc line in her arm which is inserted into a major vein for several months. However, due to various issues, a total of three picc lines were used throughout Laura's treatment. 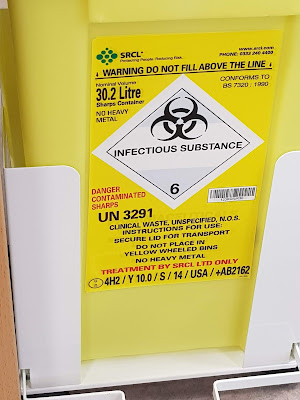 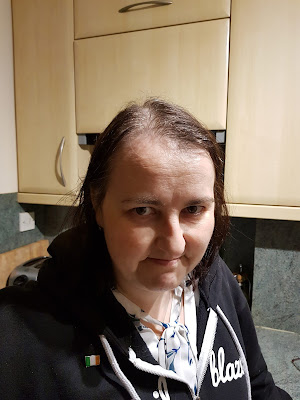 The chemotherapy drugs are now starting to show on her skin and hair, along with some weight loss. 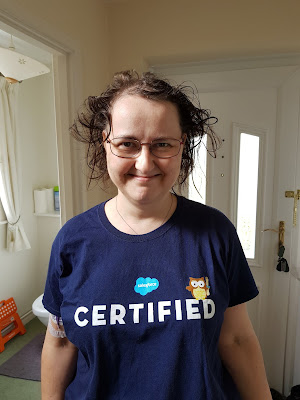 But she still has her sense of humour. 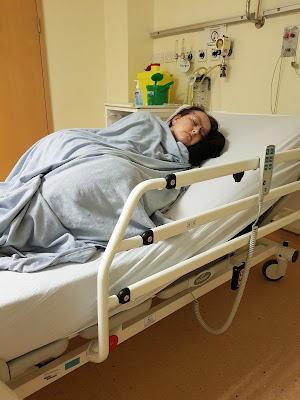 One of many trips to to A&E in the middle of the night. This one was due to severe dehydration. 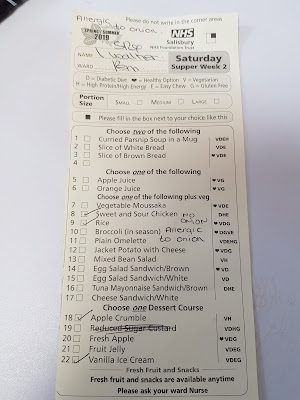 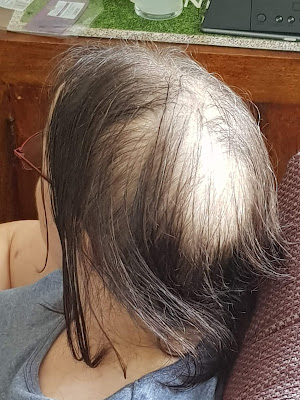 By May the effects are really starting to show. 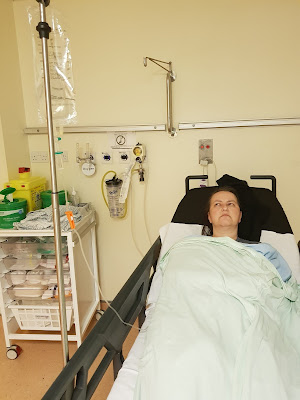 After a large spike in body temperature, we are in A&E again. This picture was taken around 5am. 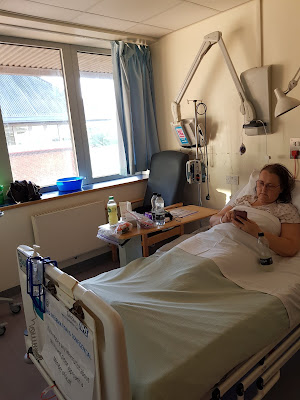 Laura in an isolation ward as she is neutropenic. By the time this picture was taken, she had already spent nearly four weeks in isolation on three separate occasions and received 2 more blood transfusions. 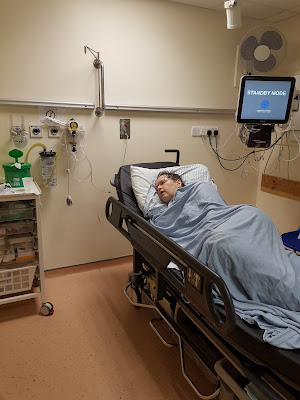 Another trip to A&E. This time at 3am. 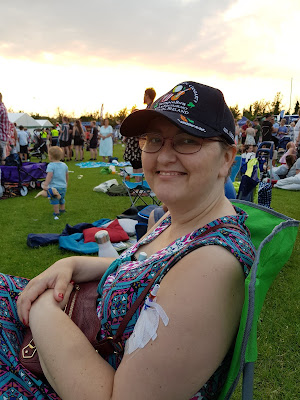 June, and Laura stays in bed all day to save up enough energy to watch the Kaiser Chiefs at an open air concert that night. It was worth it! 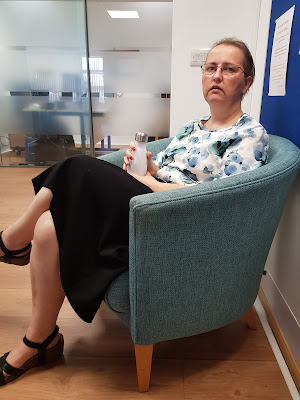 Early July. The weight loss is now very significant with over 23kg gone in just 5 months. Chemo treatment has been stopped early after 5 complete sessions as it was deemed to be doing more harm than good at this stage. 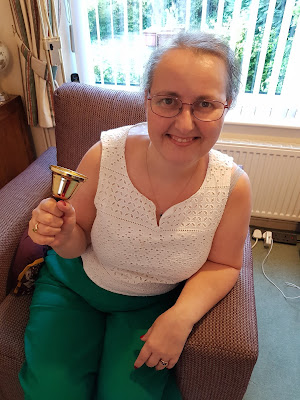 Mid July and SUCCESS!!! After her first scan, Laura is given the "all clear" and can now say she has beaten Cancer! Happy doesn't even come close... 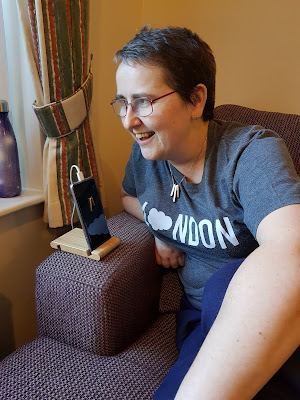 3 months on and Laura has permission from the hospital to act as an ambassador, giving people an insight and to tell her story. She now helps others around the world to make their own informed choices and a better understanding of what to expect. Here she can be seen here talking to someone from Canada who had some questions regarding upcoming surgery. At the end of just an hour on the phone, they felt happier and more relaxed, ready to face the enemy that is cancer. 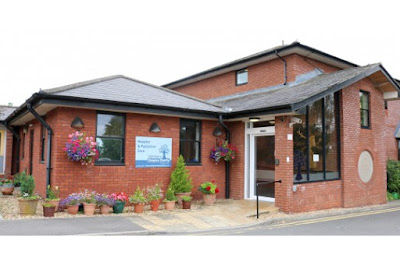 Unfortunately, the story doesn't end there. In late October 2019 we had a significant blow, as more cancer cells were detected in her liver. Despite further treatment, in December 2019 she was diagnosed as terminally ill and the effects on her body took its toll. On 1st February 2020, Laura gave her last breath in the hospice at Salisbury surrounded by her husband and family at her bedside. Our lives have been torn apart by this wretched disease.

She was my life, my rock, my soulmate. And someone who will always remain deep in my heart. I don't know what the future is going to hold for me, but I do know that from now on, life will be very different. Prior to her death, Laura asked for people to make a donation on her "Just Giving" site. The details of which can be seen below.

Our heartfelt thanks go to all the staff at University Hospital Southampton and also to Salisbury district hospital. During that time we estimate that Laura has been treated by over 400 medical professionals from District nurses through to Porters, A&E staff, X-Ray teams, Ward staff, Laboratory technicians, Surgeons, Consultants and more.

But equally, we'd like to thank the unsung heroes. These are the people who by making a completely selfless act saved the life of Laura. It took seven people donating their blood to help keep her alive. The NHS require over 135,000 units each year, so if you can spare just 15 minutes out of your day then please give blood and help save someone else's life today.

If you were affected by this story and would like to make a donation at your nearest blood bank, then we'd love to hear from you. So far we are aware that all of the blood which was given to Laura has now been replaced by the generosity of family and friends who we think are awesome. And if you know someone who would benefit from this blog then feel free to share it with them. Just copy the link in the browser and paste it on your social media or any groups that you belong to.

Recently, Laura started her own "Just Giving" page to help raise funds to go into research into Bladder Cancer. Her ultimate total goal that she really wants to achieve is £170,000 as this equates to 17 treatments of immunotherapy over a two year period, which is what is usually required to help just one single person on this treatment. You can make a donation to her site by clicking here.

Or copy and paste the full link into your browser here
https://www.justgiving.com/fundraising/laura-walker76

The more that Laura could help others, the more it gave her the strength to carry on each day. She was a truly incredible woman who I loved dearly with all my heart and more. We never know what's coming round the corner, so hug your nearest and dearest, tell them you love them and NEVER waste a second to enjoy your life together.

Leave a message in the comments section below and share this blog with all of your friends.